“When will you exit, and how much will I make?”

At a pitch event in San Francisco recently, one of the companies was asked this question by a participant on the investor panel. Frankly, the question made me bristle. Sort of like asking about the pre-nup before the first date. Still, entrepreneurs do sometimes hear this question and accordingly it deserves some consideration. Here’s what’s wrong with this question:

First of all, we live in a world where it is becoming increasingly difficult for IBM to predict where their business will be in three years, not to mention a startup that is still experimenting on a daily basis to better adjust their business model. Remember when every mature tech company in Silicon Valley was caught flat-footed in the Internet bust of 2001, and John Chambers told Wall Street analysts, “We have very poor visibility.” Flash forward to the experts in the mortgage industry in 2008! 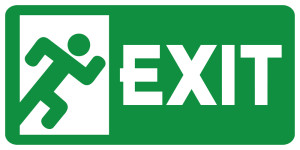 Second of all, the focus of an entrepreneur – especially at the formative stage of the company – should not be how he or she is going to “get out of Dodge”. Maybe after someone has bought the company and he is sitting around waiting for his options to finish vesting, but not when the company still has worlds to conquer!

Finally, when your mind is on getting acquired, it almost never happens. Kind of like walking into a cafe thinking “Gotta score, gotta score, gotta score …” You almost definitely won’t walk home with that gal or guy on your arm. At TouchWave we were focused on anything but getting acquired when we got an email from an obscure group at Ericsson – a group from Austria no less, not Stockholm. Five months later, we were taking down the TouchWave sign and putting up the Ericsson sign. But before it happened, it was the furthest thing from our minds.

So how should entrepreneurs respond to this question? The numbers a professional investor needs to estimate your exit potential are your market size and projected revenue and earnings. From that they can extrapolate a market capitalization. Very roughly, but at this stage, roughly is all that’s possible. site down or not So you should have a good handle on your market size and projections (and of course they know that).

Beyond that I would emphasize my commitment to building a business. cameroon As the guys at 37Signals put it:

“Building to flip is building to flop.” “You need a commitment strategy, not an exit strategy.” (Rework, Jason Fried, David Heinemeier Hansen).

Investors who aren’t committed to supporting you in building a great business don’t deserve to invest in your company. Never forget that!